Efficacy of Scallop-derived PLASMALOGEN on patients with mild cognitive impairment

People with mild cognitive impairment (MCI) have more memory issues than healthy people of their age, but the symptoms are not as serious as those diagnosed with dementia or Alzheimer’s disease. It is an intermediate stage between cognitive decline of normal ageing and the more severe decline of dementia. Signs of MCI include forgetting things more frequently, forgetting to go to events or appointments, or having more difficulty with vocabulary than others of the same age. Despite with memory issues, they are still able to carry out their normal daily life and usual activities. They do not experience  personality changes or other problems that are peculiar to dementia. Nonetheless, people with MCI has an increased risk of developing dementia including Alzheimer’s disease. Hence, early preventive measures should be taken before the condition becomes worse.

A recent study shows that oral administration of 1000 µg Scallop-derived PLASMALOGEN improved cognitive function of MCI patients, particularly the ability to orientate places. In this study, 178 patients with MCI were orally administered 1000 µg of Scallop-derived PLASMALOGEN or placebo daily and their cognitive function was evaluated using MMSE-J (Mini Mental State Examination-Japanese) test at baseline (week 0) and week 24. The MMSE score ranges from 0 to 30, with higher score indicating better cognitive function. The MMSE-J total score increased by 0.59 in the plasmalogen group and by 0.39 in the placebo group. Of the 11 domains of the MMSE-J test, the ability to orientate places improved significantly in the plasmalogen group, but not in placebo group. The change of the score was also significantly different between plasmalogen and placebo groups. For orientation to time, there was no appreciable change between baseline and endpoint for plasmalogen group, but placebo group showed a statistically significant deterioration at endpoint compared to baseline. In brief, oral administration of Scallop-derived PLASMALOGEN is beneficial to people with MCI. 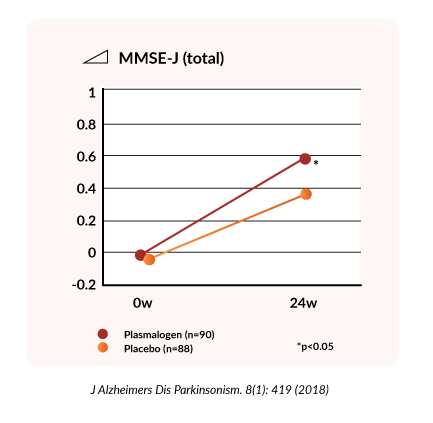 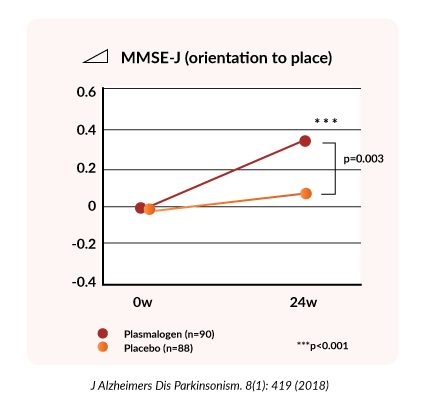 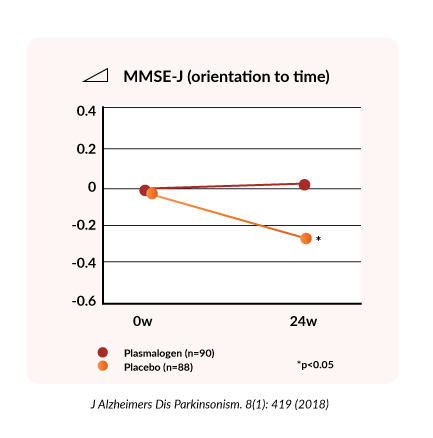