Patients diagnosed with Alzheimer’s Disease are observed to have one or more of the following: 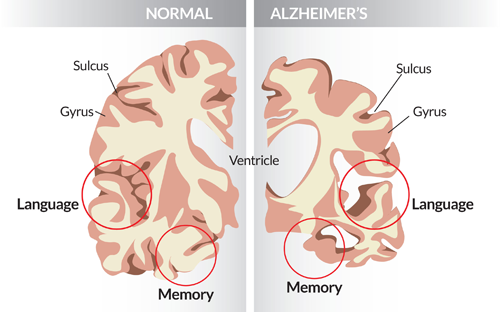 The changes in the brain mentioned above may begin years before any symptoms appear. This period is known as preclinical Alzheimer’s disease (AD).

AD can be categorised into three stages: mild, moderate and severe AD. Below shows the symptoms present at each stage of AD once symptoms start to appear. Please note that this should only be used as a general guide. You are advised to seek medical advice or take the tests for Alzheimer’s Disease for an affirmative diagnosis of AD.

Alzheimer’s and the Brain
This video provides insight into the structure and changes of brain in Alzheimer’s disease.

Siddarthan Chandran – Can the Damaged Brain Repair itself? TED Talk
Siddharthan Chandran, a regenerative neurologist, proposed a possible solution to brain degenerative diseases, through the use of stem cell technology to allow self-repair of damaged brain.