In a clinical trial, patients (aged 60 – 85 years) with mild Alzheimer’s disease (AD) were orally administered 1,000 µg (500 µg twice a day)* Scallop-derived PLASMALOGEN or placebo daily for 24 weeks and their cognitive function was assessed.

Oral administration of Scallop-derived PLASMALOGEN significantly improved memory function of the mild AD patients in which significant memory improvement was also seen in a subgroup of female subjects and those who were younger than 77 years old. No clinically relevant adverse events were observed and thus, it is safe for consumption. 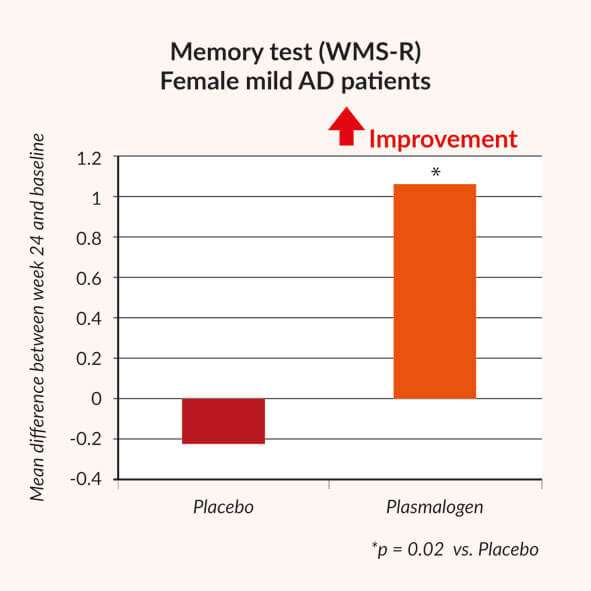 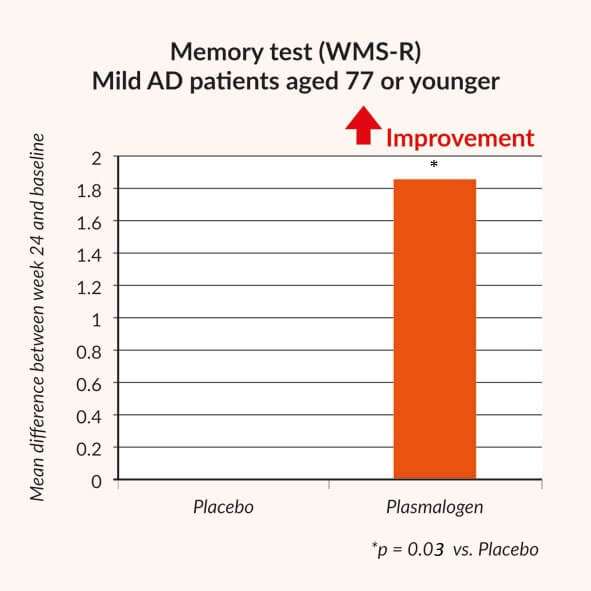 Open clinical trial of Scallop-derived PLASMALOGEN on patients with moderate and severe dementia:

Title of this trial: Effect of plasmalogen-containing food on cognitive function in patients with dementia (except mild Alzheimer’s disease)

Patients with moderate and severe dementia (Alzheimer’s dementia, Lewy body dementia, cerebrovascular dementia and semantic dementia) were the targeted subjects in this open trial. To compare the effects of the ingestion of Scallop-derived PLASMALOGEN, evaluation of MMSE scores of the subjects, objective evaluation by caregivers and measurement of blood plasmalogen concentration were performed for a period of 3 months. This trial involved 225 Japanese men and women aged 60 to 85. This trial had been completed in April 2016 and the data is expected to be available in recent years.

Who should take Scallop-derived PLASMALOGEN…

Alzheimer’s disease is a progressive disease, which could be detected at an early stage by consulting a physician. Early discovery helps individuals and family members to have a better understanding of the symptoms and sufficient time for future planning. Appropriate timely actions can possibly delay the onset of the disease and improve symptoms. High-purity Scallop-derived PLASMALOGEN is suitable for people:

Like Alzheimer’s disease (AD) patients, Parkinson’s disease (PD) patients are reported to have decreased plasmalogen levels in the brain and blood. PD is a progressive disorder of the nervous system that mainly affects movement, with symptoms such as shaking, rigidity, slowness of movement and difficulty with walking. This disease results from the cell death in midbrain and ingestion of plasmalogen could possibly restore plasmalogen levels in their bodies and recover their brain functions.