A research team chaired by Takehiko Fujino, Emeritus Professor of Kyushu University in Japan has ascertained that plasmalogens are the key to the improvement of dementia.

The research team achieved unprecedented discovery of the action of neurogenesis by plasmalogens. Administration of plasmalogens to mice with brain inflammation has provided evidence leading to the findings of plasmalogen inducing the production of new nerve cells in the hippocampus of the brain (an area which governs memory). The research proposed that neurogenesis would be the new treatment for dementia, making and it unnecessary to improve cells damaged by amyloid β proteins.

Sandrine Thuret, a neural stem cell researcher, proposed that adult brains can grow new nerve cells (neurogenesis). She also offered research and practical advice on how we can help our brains in this process.

Plasmalogens were suggested to have anti-inflammatory and anti-amyloidogenic effects, this indicates a probable therapeutic application of plasmalogens against Alzheimer’s disease. Neuroinflammation involves an activation of glial cells as the cause / effect of Alzheimer’s disease. Intraperitoneal injection of lipopolysaccharide (LPS) caused an increase in the number of microglia displaying neuroinflammation in the hippocampus of adult mouse. These LPS-activated glial cells were significantly attenuated by the treatment of plasmalogens. Moreover, LPS-activated accumulation of amyloid β proteins in the neurons of hippocampus was also eradicated by the plasmalogen treatment (Katafuchi T et al., 2012). 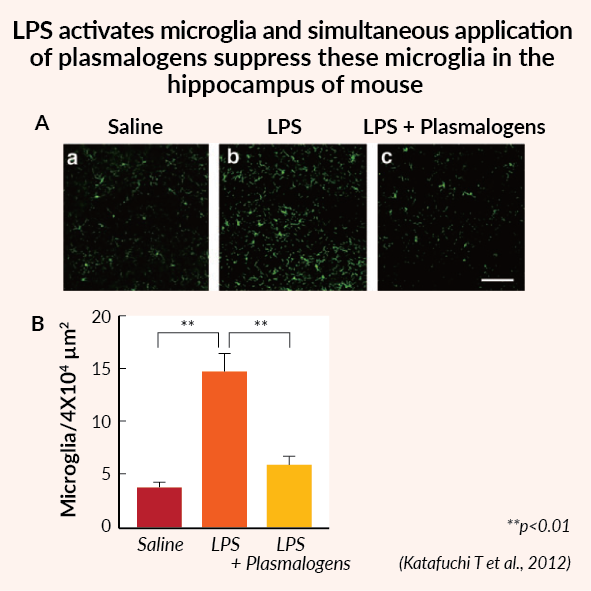 LPS-activated accumulation of the amyloid β proteins while simultaneous application of plasmalogens suppressed these proteins in the hippocampus of mouse. Neurons were stained with NeuN which is shown in red (a – c). Control group treated with saline showed a slight fluorescent of amyloid β immunoreactivity (green) (d). LPS treatment increased the accumulation of amyloid β proteins (e) and these proteins were completely eradicated by plasmalogen treatment (f). Amyloid β and NeuN fluorescences were merged to show an intracellular location of amyloid β in the neurons (g and h) (Katafuchi et al., 2012). 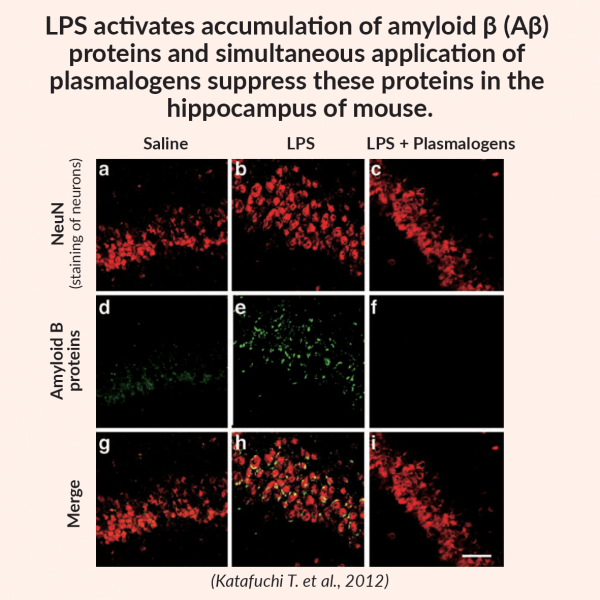 Neuronal cells are susceptible to stress and this can lead to cell apoptosis and neurodegenerative disorders.

Plasmalogens were found to effectively inhibit neuronal cell death in mouse induced by nutrient deprivation, suggesting anti-apoptotic action of plasmalogens in brain. Thus, this leads to the hypothesis that decreased plasmalogen levels in the brain of Alzheimer’s sufferer could be one of the factors for neuronal loss and future therapeutics preventing neuronal cell death could potentially cure Alzheimer’s disease (Hossain MS et al., 2013). 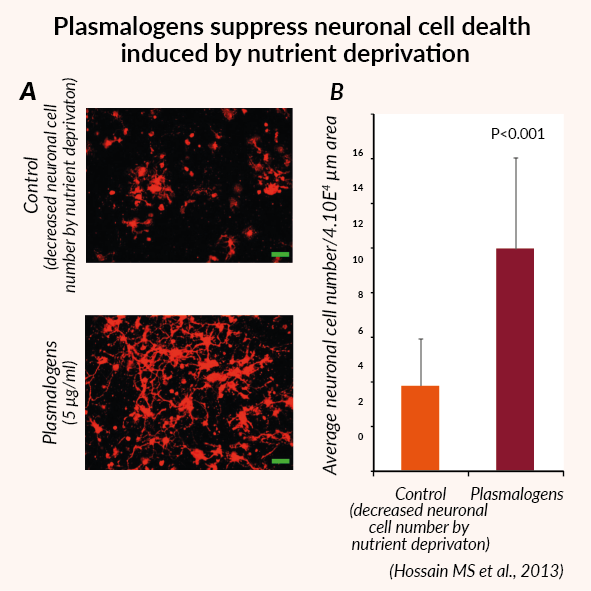 Improvement in learning and memory function

Plasmalogens improve learning and memory function. In the Morris water maze experiment, plasmalogens were given to healthy mice for 6 weeks and the time taken for each to reach a transparent stage hidden 1 cm below the surface of water in a pool was measured. This was the world’s first animal testing conducted to demonstrate the scientific correlation between plasmalogen and dementia. Memory of the mice given plasmalogens improved dramatically compared with the mice from the control group. Mice administered plasmalogens were able to reach the transparent stage in 10.43 seconds, while mice without any administration of plasmalogens took 30.10 seconds to complete the task. This result demonstrated the enhancing effect on learning and memory functions with the intake of plasmalogens. 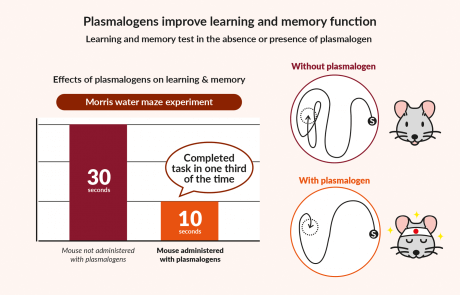