Plasmalogens are a type of phospholipid present in almost all tissues of human, and are most abundant in the brain. They are essential for their critical roles in memory, focus and cognitive functions. Plasmalogen levels in the body begins to increase from foetal stage and reach its peak by the 30s and start to decline thereafter. Research have indicated that this decline affects brain performance especially in plasmalogen-deficient seniors. 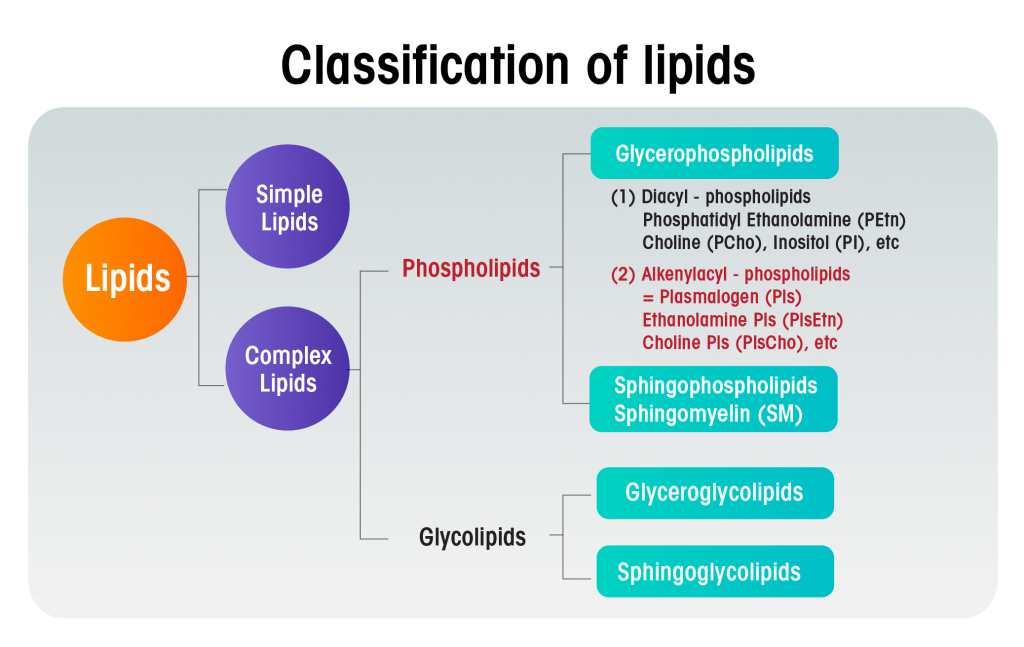 Plasmalogen contains a fatty alcohol with a vinyl-ether bond (combination of an alkene and an ether) located at the sn-1 position and fatty acids, such as docosahexaenoic acid (DHA, omega-3) or arachidonic acid (AA, omega-6) located at the sn-2 position of the glycerol backbone. At the sn-3 position, the carbon links to an ethanolamine (ethanolamine plasmalogen) or a choline (choline plasmalogen) by means of a phosphate ester bond.

Plasmalogens are synthesized in peroxisomes (organelles). Peroxisomal function decreases with age and which in turn leads to decreased synthesis of plasmalogens.

Our brain is the organ that contains the highest amount of plasmalogens and they are a key component of neuronal membranes and myelin sheaths. Therefore, reduced plasmalogens in the brain have been shown to manifest in various neurodegenerative disorders including Alzheimer’s disease. 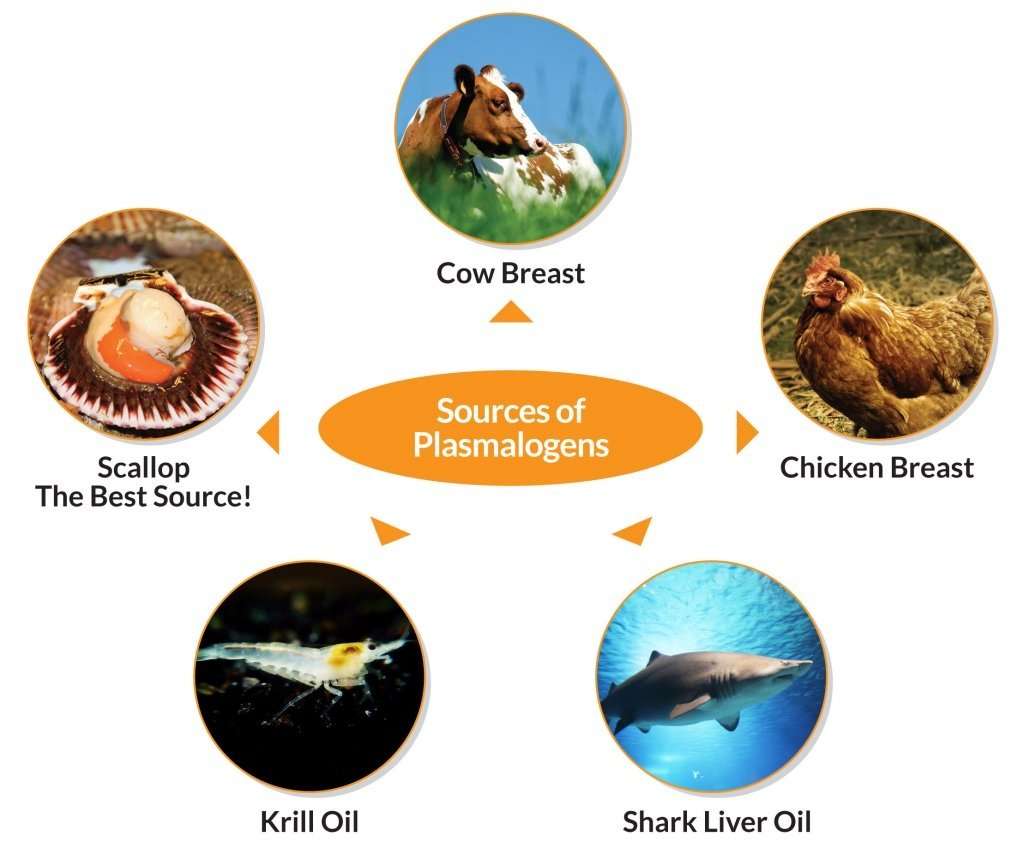 Most plasmalogens in the body are biosynthesised (produced by our body). However, a small amount of plasmalogen can also be obtained from food sources such as scallop, chicken and cow breasts, shark liver oil and krill oil. 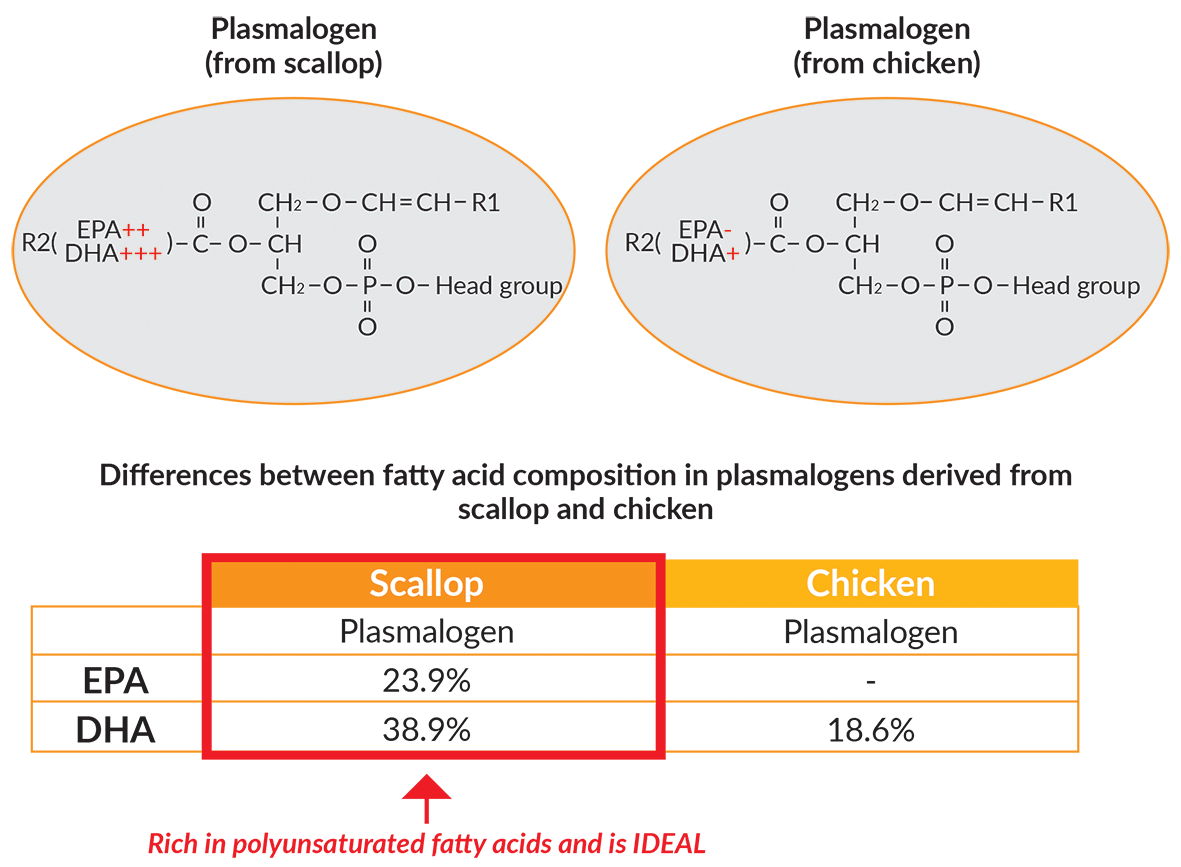 Plasmalogen with DHA and EPA was found to have better and quicker effects on brain. They are essential fatty acids that can only be obtained from food as neither of them can be synthesised in our body. These two fatty acids are important for retinal, immune, cardiovascular, neuronal and cognitive functions.

Do you know?
The marine invertebrates have high ethanolamine plasmalogen (PlsEtn) contents. PlsEtn is present at high levels in the brain and they are believed to be involved in neuronal protection. PlsEtn species of marine foodstuffs are predominantly enriched with DHA and EPA; while PlsEtn species in land foodstuffs are enriched with eicosatetraenoic acid (ETA) (Yamashita Y et al., 2016). Hence, PlsEtn containing DHA and EPA from marine foodstuffs is potentially beneficial as a therapeutic dietary supplement to ameliorate and prevent neurodegenerative diseases, such as Alzheimer’s disease.

Distributions of Plasmalogens in Different Tissues

Distributions of Plasmalogens in Different Tissues

Plasmalogens constitute up to 20% of total phospholipid mass in human body. More than 50% of glycerophosphoethanolamine (GPEtn) fraction are found in brain, heart, neutrophils and eosinophils of human. In certain brain regions, plasmalogens may constitute up to nearly 90% of the GPEtn fraction. Furthermore, plasmalogens are also found abundantly in kidney and skeletal muscle. A high percentage of both ethanolamine plasmalogen (PlsEtn) and choline plasmalogen (PlsCho) are detected in heart and skeletal muscle. Liver is found to have the lowest amount of plasmalogens which can be related to their synthesis in liver and successive transport to other tissues by lipoproteins. (See table below)

In addition to tissues, plasmalogens are also important components of cell membrane (~15 to 20% of total phospholipids) and subcellular membranes including nucleus, mitochondrion, endoplasmic reticulum and post-Golgi network. Nonetheless, plasmalogens have not been detected in peroxisome membranes though their biosynthesis starts in peroxisomes. Plasmalogens are also found in specialized membranes, such as sarcolemma and myelin (part of nerve cell), as well as secreted membranes, such as synaptic vesicles, secretory granules and surfactant.

Distribution of plasmalogens in different tissues of human and other mammals.

This table was extracted from Braverman NE & Moser AB, 2012.

Plasmalogen deficiency and other diseases:

In addition to Alzheimer’s, plasmalogen deficiency is also associated with various neurological, respiratory and other disorders.

Many neurological disorders are associated with changes of plasmalogen levels, which could be due to a decrease of plasmalogen synthesis or an increase of their degradation.

Brain is the tissue that contains the highest amount of plasmalogens and reduced plasmalogen levels in brain are associated with other neurodegenerative diseases such as Parkinson’s disease (Fabelo N et al., 2011), Neimann Pick type C (Schedin S et al., 1997), Down syndrome (Murphy E J et al., 2000) and experimental autoimmune encephalomyelitis (Singh I et al., 2004). Nonetheless, it remains elusive whether the reduced plasmalogen level is a leading cause or downstream effect of these pathologies.

Plasmalogen deficiency is featured in Zellweger syndrome, which is an autosomal recessive disease. During development, PlsEtn are increasingly enriched in adrenic and oleic acids (polyunsaturated fatty acids) in normal myelin. However, in the brains of Zellweger syndrome patients, PlsEtn is deficient of both adrenic and oleic acids, which implying abnormalities in this disease. In brief, plasmalogens are deficient quantitatively and qualitatively with alteration of polyunsaturated fatty acids in Zellweger syndrome. The plasmalogen deficiency is suggested to be caused by insufficient mRNA for enzymes of ether lipid synthesis (Martinez M et al., 2000).

Fetal alcohol syndrome (FAS) may be due to persistent ethanol consumption by mother during pregnancy. Newborn with FAS have defective intelligence, motor function and hyperactivity. The mechanism of this brain damage remains elusive. Nonetheless, ethanol consumption is hypothesized to affect the accumulation of DHA in brain development in which this fatty acid is required for the synthesis of plasmalogens in peroxisomes. Another finding also revealed that developing and adult brains have lower DHA and plasmalogen levels in neural membranes with ethanol exposure (Wing D R et al., 1982; Hofteig JH et al., 1985). The low DHA levels in fetal’s brain triggered by ethanol can be restored by increasing dietary DHA intake by mother.

COPD is a progressive lung disease characterized by long-term poor airflow. Among the symptoms of this disease are breathing difficulty, wheezing, coughing with sputum production, chest tightness and others. Smoking is the major cause of COPD. Metabolic profiling of a large number of COPD patients revealed statistically significant correlation between smoking and plasmalogen deficiency. This was further supported by down-regulation of AGPS (responsible for a critical step in plasmalogen synthesis) transcript in lung tissues of smokers, implying a reduction in plasmalogen synthesis (Wang-Sattler R et al., 2008)

In consideration of lung is a direct target of reactive oxygen species (ROS), plasmalogen potentially protect against respiratory diseases via their antioxidant property. Plasmalogens in the lungs are enriched with arachidonic acid (AA, an omega-6 fatty acid involves in proinflammatory and immunosupportive), suggesting the role of plasmalogens in immune defenses. All these data propose that plasmalogens may play important roles in normal lung functions.

Low-density lipoprotein (LDL) from patients with obese metabolic syndrome and type II diabetes are found to have decreased ethanolamine plasmalogen (PlsEtn) levels by 22% and 49% respectively and increased lipid peroxidation compared to controls (Colas R et al., 2011). In addition, PlsEtn levels are also detected to be lower by 20% in red blood cell membranes of hyperlipidemic (abnormally elevated levels of fat and fatty substances in blood) patients.