Alzheimer’s disease is a type of dementia that causes memory, thinking and behavioural issues. It is a neurodegenerative disorder characterised clinically by a number of complex neuropathologies, including neurofibrillary tangles, amyloid plaques, neuroinflammation, hypomyelination, synaptic dysfunction and neuronal loss.

In a healthy brain, various neurons communicate via synapses where neurotransmitters carry information from one neuron to another. In an Alzheimer’s diseased brain, this process is interrupted. Synapses and neurons are eventually damaged, deteriorating the brain’s communication network. As Alzheimer’s disease damages nerve cells in the brain, patients’ cognitive function will gradually decline. Their memory, reasoning, judgement and locomotive ability will be impaired as the disease progresses to an advanced stage.

Alzheimer’s usually occurs to people aged 65 years and above; it is not part of the normal process of ageing. On average, an Alzheimer’s patient can live 8 to 10 years after diagnosis.

This progressive and terminal disease can also last as long as 20 years for some cases. It is irreversible and there is no known cure to date. The cause of this disease is still unidentified and researchers are still seeking a solution to treat it.

Currently, there are five FDA-approved drugs available in the market that can only alleviate symptoms or temporarily slow down the progression for some people. However, these drugs cannot treat the underlying causes of the disease nor stop or reverse the progression. For patients with mild to moderate symptoms , doctor may prescribe Aricept® (donepezil), Exelon® (rivastigmine) or Razadyne® (galantamine). Patients with moderate to severe symptoms can be treated with Aricept® (donepezil), Exelon® (rivastigmine), Namenda® (memantine) or Namzaric® (a combination of donepezil and memantine).

Andres Lozano, a neurosurgeon, talks about an emerging technique which allows surgeons to place electrodes in almost any area of the brain to correct brain dysfunction such as Alzheimer’s, Parkinson’s and depression.

Dementia is a disease that usually affects the elderly. However, due to the rapid ageing population, the cases of dementia is also increasing exponentially.  In the Asia Pacific region, the number of people diagnosed with dementia is expected to increase from 13.7 million in 2005 to 64.6 million in 2050. In Singapore alone, people aged 65 and above will constitute to 15% – 20% of the total population by the year 2030. One in 10 adults aged 60 and above has dementia (WiSE study, Institute of Mental Health, IMH) and the number of actual cases has increased from a total of 22,000 in 2005 to 40,000 cases in 2015. This figure is expected to escalate to 187,000 cases by 2050. 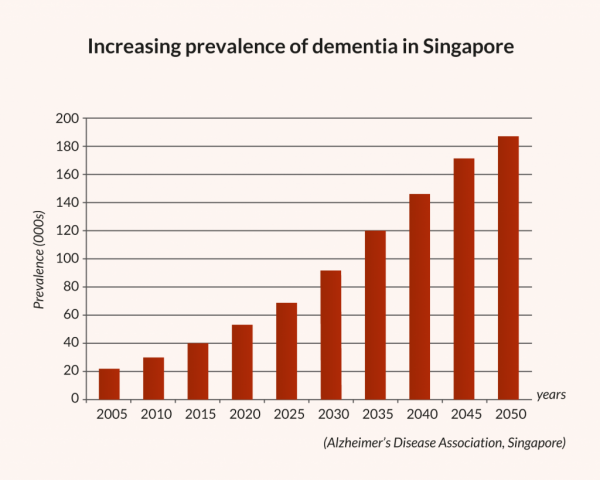 How does Alzheimer’s differ from Dementia?

Alzheimer’s disease and dementia are often mistakenly used interchangeably. Dementia is an umbrella term for a set of symptoms that affects communication and performance of daily activities, including impaired memory and reasoning. Dementia can be caused by conditions such as Alzheimer’s disease, Parkinson’s disease, Huntington’s disease, stroke, nutrient deficiency, etc. Alzheimer’s disease is the most common cause of dementia that specifically affects parts of the brain that control memory, thinking and language. In addition, some forms of dementia such as those resulting from nutrient deficiency are temporary or reversible, Alzheimer’s is irreversible based on current conventional drugs available.

Signs and Symptoms of Alzheimer’s Disease